The Kilaueas And Surfer Joe Play The Astronauts & More 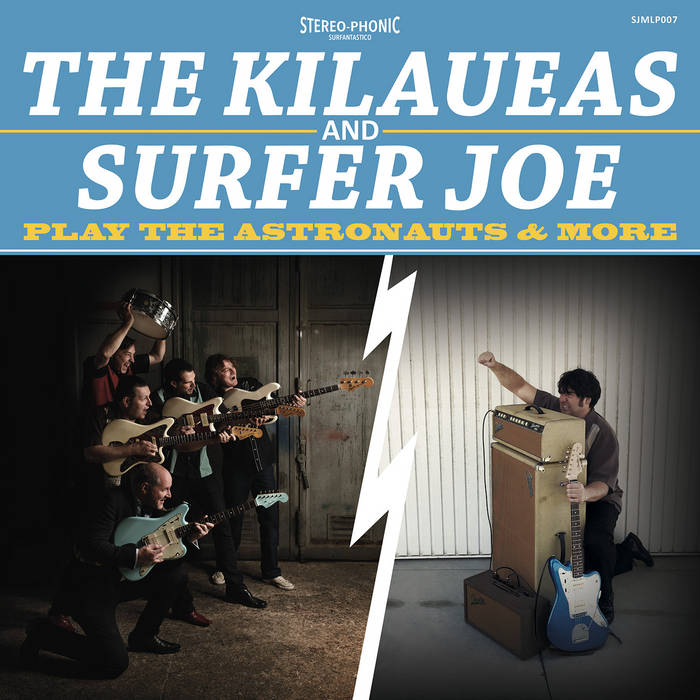 So, what is the idea behind this album? And who are The Astronauts?

Nearly everyone who is interested in surf music listens to The Astronauts songs. In 1963 The Astronauts were produced by RCA, in the middle of the surf era, and they collaborated with famous Lee Hazlewood who also composed some legendary surf songs, like Baja, The Hearse and Surf’s You Right.

But why there has never been an “Astronauts tribute album” or something similar? Today a lot of bands still have Astronauts’ songs in their set, but nobody has worked on a more complete “Astronauts project”. We have all the weapons we need: Fender Showman Amps, Reverb tanks, Jazzmaster and Jaguar guitars!

Lorenzo “Surfer Joe” Valdambrini, the International Surf Music Ambassador, is a well known musician in the modern surf scene, constantly on tour worldwide with his band spreading out the sound of traditional surf music. Lorenzo is also the co-producer of the Surfer Joe Summer Festival, today’s biggest surf music event.

The Kilaueas are a German band from Berlin active since 1998 dedicated to the traditional surf sound and acclaimed as one of the best surf combos for their compositions and their amazing live performances.

Since 2011 Lorenzo has played drums on some tours with the Kilaueas and they had the idea to do a tribute album to the Astronauts. In a few shows, where also Alex Faide (Los Twang Marvels) was added on third guitar, the extended Kilaueas played a long set of Astronauts’ tunes. The audience liked it a lot as it was really featuring that particular kind of sound impact!

The time has come to turn that idea into reality: with this album we want to honor The Astronauts for their great work and unforgettable surf sound!

Lorenzo Valdambrini has recorded all instruments by himself for his part of this album, translating in music all his passion and love for the Astronauts, while focusing on the little details that made those 60‘s songs so unique. The guitar parts, the drums and the rhythm are the key elements to re-create the Astronauts’ sound and these are all featured in his 8-tracks.

Surfer Joe also wanted to add some original music recorded in the Astronauts’ style and so the Astrobeat Stomp was born, a very pushing instrumental with the drippiest guitar ever!

One of the top touring artists in modern surf music!

Serena Cherry debuts her black metal project, plus a Pick from the Crypt block from Svalbard